I may not have learned how to be a domestic goddess, but I sure love the cheesecake recipe.

I was a little obsessed with Nigella Lawson since I first saw her on the Food Network in the early aughts of the new century. She was pretty, had her own simple style, used quality ingredients, cooked what she wanted to eat, actually ate heartily on camera, and she is a Brit!

I purchased a few of her cookbooks, within one I found a great cheesecake recipe. I have used it several times with excellent results. It is a good base recipe to change-up and add different ingredients depending on the type of cheesecake you want to make. I have done dark chocolate,  vanilla, dulce de leche, blackberry, and key lime. All of them have turned out very well.

I have included links to Nigella’s chocolate recipe below as she has written it. However, I would like to share some of the tricks I learned over the last few years to ensure the best results. 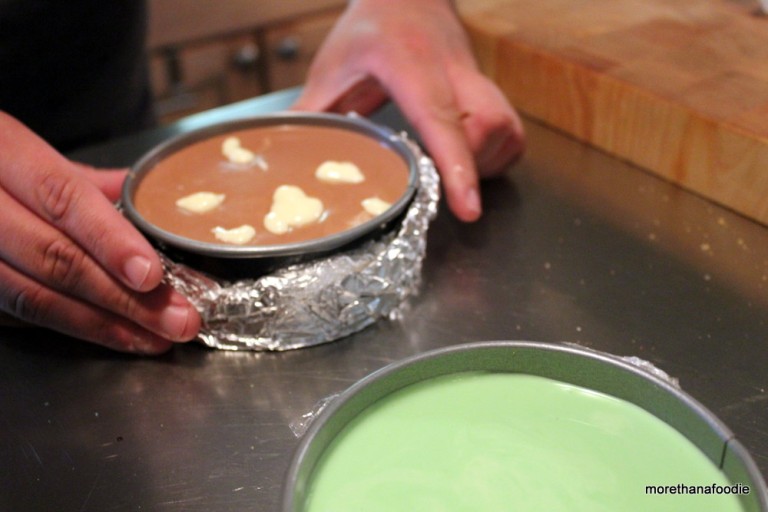 Line the Springform Pan – Ensure you cover the bottom of the springform pan with aluminium foil and then a good plastic wrap. The plastic wrap may be a bit foreign to use for some, but it is used a lot in commercial kitchens. The wrap will be just fine and will not melt into the cheesecake base. It helps create a barrier to the water bath needed to cook the cheesecake.

Crust – I usually use graham crackers for the crust but it depends on the type of cheesecake I am creating. I have used chocolate wafers, ginger snaps, cinnamon grahams, and macadamia nuts. You can also make this recipe gluten-free by using gluten-free grahams, cookies, biscuits, or nuts as a base.

Press the Crust – After making the crust, I use a meat pounder to press the crust making it even and uniform.

Crust in the Freezer – After pressing the crust, I put it in the freezer to ensure the butter sets and the crust becomes nice and cold.

Bang Out the Bubbles – As you make the cheesecake and fill the springform pan you will create air bubbles. These bubbles need to be “banged” out of the cheesecake to ensure a dense cheesecake and to prevent a smooth finish on the top. Gently pick up the filled springform pan and drop on the counter. I probably do this 20 times or more to get rid of the air bubbles. You will see them rise to the top and disappear. You should be a bit aggressive, but no so much that you would spill any of the batter. 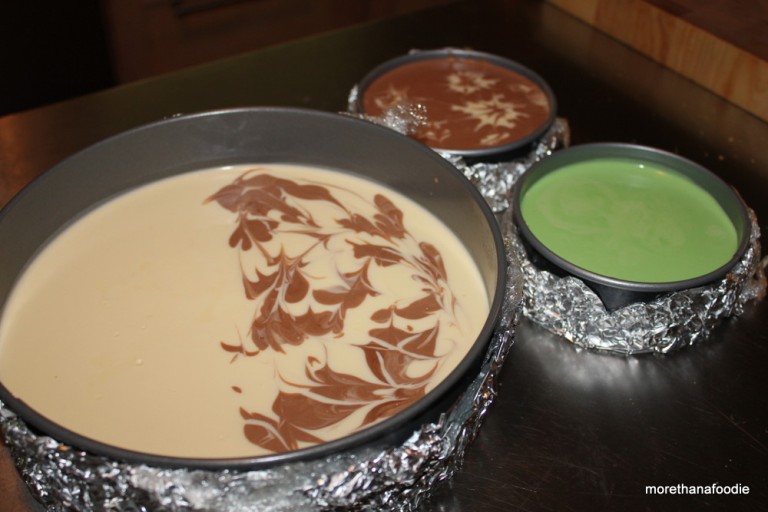 Swirls – Pull aside some batter and add chocolate, food coloring, or another type of cheesecake batter (blackberry for instance). Add little drops to the top of the cheesecake and swirl with toothpicks. Viola!

Consistency of Cheesecake – I use my Kitchen Aid Pro Mixer to mix the cheesecake batter. If I want a light and fluffy cheesecake I will beat the batter longer adding air into the mix. After some trials and feedback I found that people really prefer the denser cheesecake. I now only mix until all ingredients for the cheesecake base are well blended. Results in a more dense cheesecake.

Serving Temperature – I have found this cheesecake is served best chilled. When it is room temperature it can be hard to cut and very rich. The chill in my opinion makes it taste better and creates a party in my mouth.

A mini original Chocolate Recipe with non-chocolate vanilla base swirl. 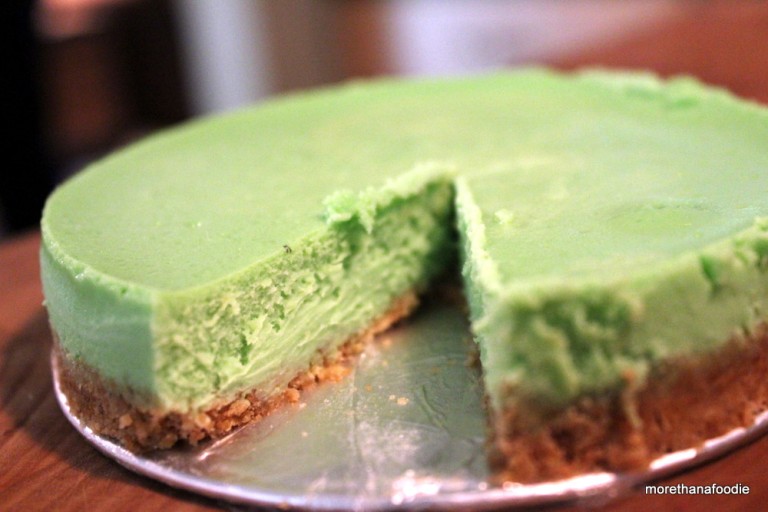 Pandan is a tropical plant that is used in Southeast Asian cooking. When I smell it reminds me of an almost hazelnutty and citrus-like aroma. It also reminds me of caramel or coconut. However, it is not coconut for all of those who loathe it. It actually makes my mouth water. The pandan extract can be found in Asian markets. It made for an exotic, delectable cheesecake with a beautiful greenish-yellow hue.

In the recipes which I have not made as chocolate, I just leave out the cocoa powder and the chocolate. I then replace it with the same amount of fruit (sweetened and reduced blackberry puree) or fresh dulce de leche. If I am doing a simple flavored cheesecake I just add in a tablespoon or so of the ingredient (vanilla or pandan). I have achieved excellent results in both cases.

Nigella’s recipe calls for custard powder. This is an ingredient from the UK. You can find it a World Market or in your local grocery stores. I have seen it for sale in the International aisle of Hornbacher’s foods in Fargo, ND. If you cannot find it try Amazon or there are some substitutes but I have never tried them.

Cheesecake really isn’t too hard if you are willing to try to make it and have the right tools, most importantly a springform pan.  Once you have this there is really no excuse for you not to be able to make a cheesecake. Making it from scratch does take some work, but it in the end it is worth the effort.